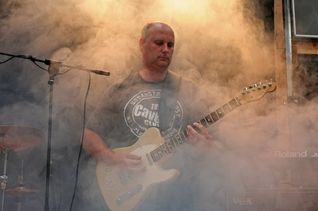 Mikey formed the band “Gypsy” in 1974 together with Alan, John-John and Henrik. The band played gigs in the Copenhagen area.

After the band stopped playing, Mikey kept practicing his guitars skills. That way he was ready to reunite the old Gypsy band in 2006.

When Alan in 2007 started CEONEO in Copenhagen by merging the old "Gypsy" with the newer "Grumpy" (a party band Alan had played in for 10 years), Mikey joined the band as guitarist. His primary job on songs and live is playing rhythm guitar and he is especially know for his Leslie sounding guitar riffs that is a cornerstone in CEONEO’s sound.

Mikey has always been a part of the creation of CEONEO songs: arrangement, mixing and overall production, and his retro fingerprint is on a lot of our songs.

Also Mikey wrote his first song “Listen to the Echoes” with Alan (to be released fall 2014).

He has been playing a lot of live gigs all over Denmark with CEONEO, presently he joins the band in the U.S. as often as he can. And he plays with other bands in the Copenhagen area.

Mikey is musically inspired by the '70s Rock, where he listened to Deep Purple, Black Sabbath, Slade and Status Quo amongst others. As the years have gone by, his music taste has been extended to folk, jazz, country and classical.